The harness itself is part of a larger movement: the leather community. Reaching its height from the 1950s-1980s, the leather community has been wildly influential. Its influence appears on fashion runways, in kink communities, and the imagery and practices developed still create a sense of community for queer people today.

When I set out to write the history of the harness, I should have sensed the spiral of research I was about to be drawn into. I thought I would find a quick timeline and the name of a designer and move on, but oh no: as with much of queer history, I became fascinated with the gender and sexual dynamics at play in this history-behind-a-history. I seem to have a knack for pulling at a thread that leads to a whole gay-ass sweater. 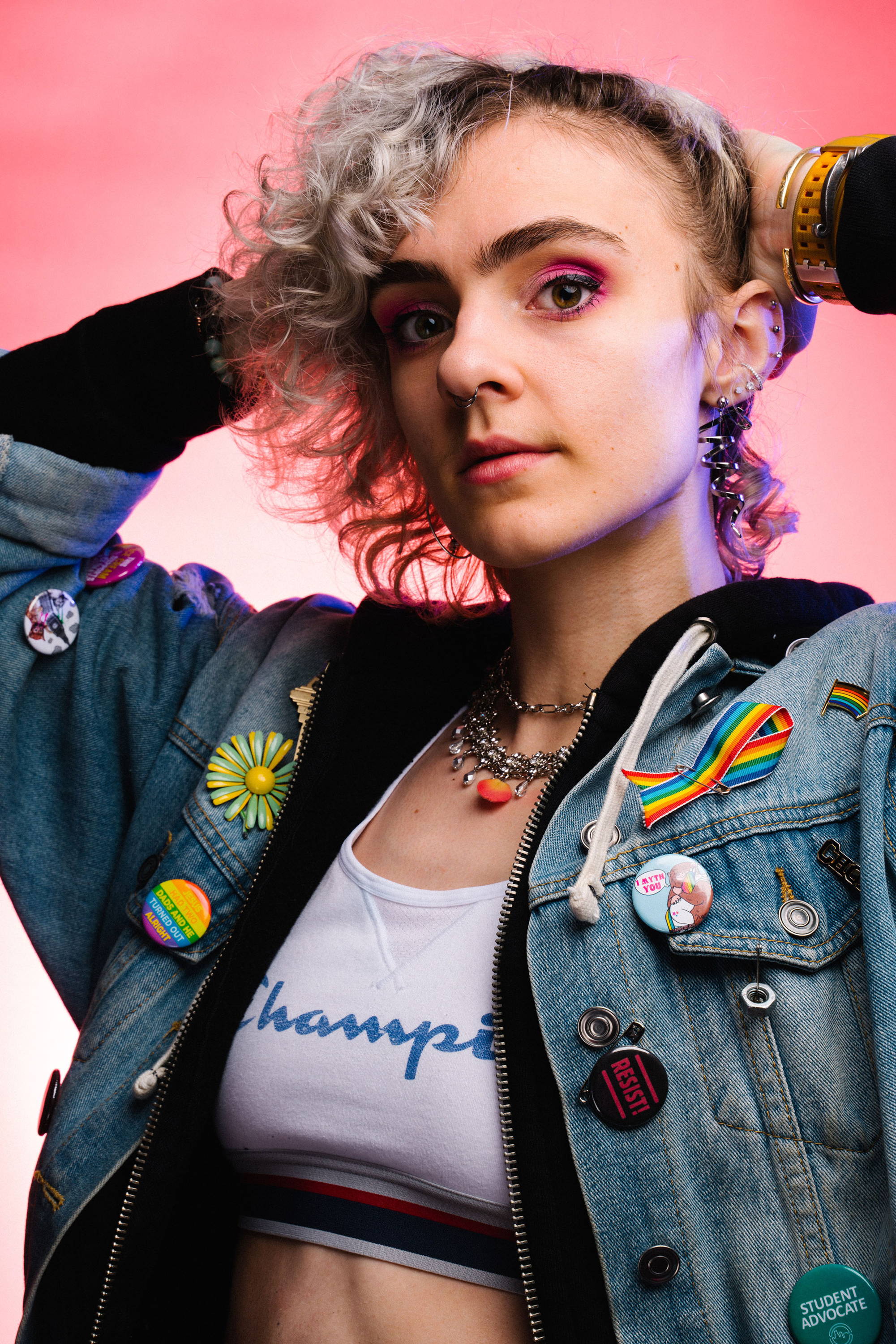 Madeline Dintino (they/them) is a queer and non-binary individual who specializes in thinking, creating, and designing for radical inclusivity. They are a queer theorist with a focus on fashion design, and they believe that with the liberation of the most marginalized among us, we all are set free.

Madeline Dintino (they/them) is a queer and non-binary individual who specializes in thinking, creating, and designing for radical inclusivity. They are a queer theorist with a focus on fashion design, and they believe that with the liberation of the most marginalized among us, we all are set free.

A Quest for Queer Lore...

Recently I was told a story from NYC Pride (where many queer stories get their origin) of someone wearing a bustle made from the Leather Pride Flag on a mini-skirt, and a couple of younger queer folx – one in a harness – came up and asked if it was a pro-police flag. As it was told to me, the exchange ensued with understanding and education, and the general vibe of “know your history, and do your research!” The truth is, speaking as a queer of only 23 years, we need these kinds of interactions. We need our cultural elders to tell us things, to point us which direction to go in researching the history most of our parents never taught us.

When pride is educating young queer people about our history, it is doing a good thing. The truth is, the AIDS epidemic has created a generational imbalance. The systemic commitment to allowing queer lives to end during that time (and still today) makes knowing our history difficult, and sometimes, we don’t know where to look.

So it is in this spirit that I turn to the internet to try and uncover the lore of different corners of our community, a little bit at a time. 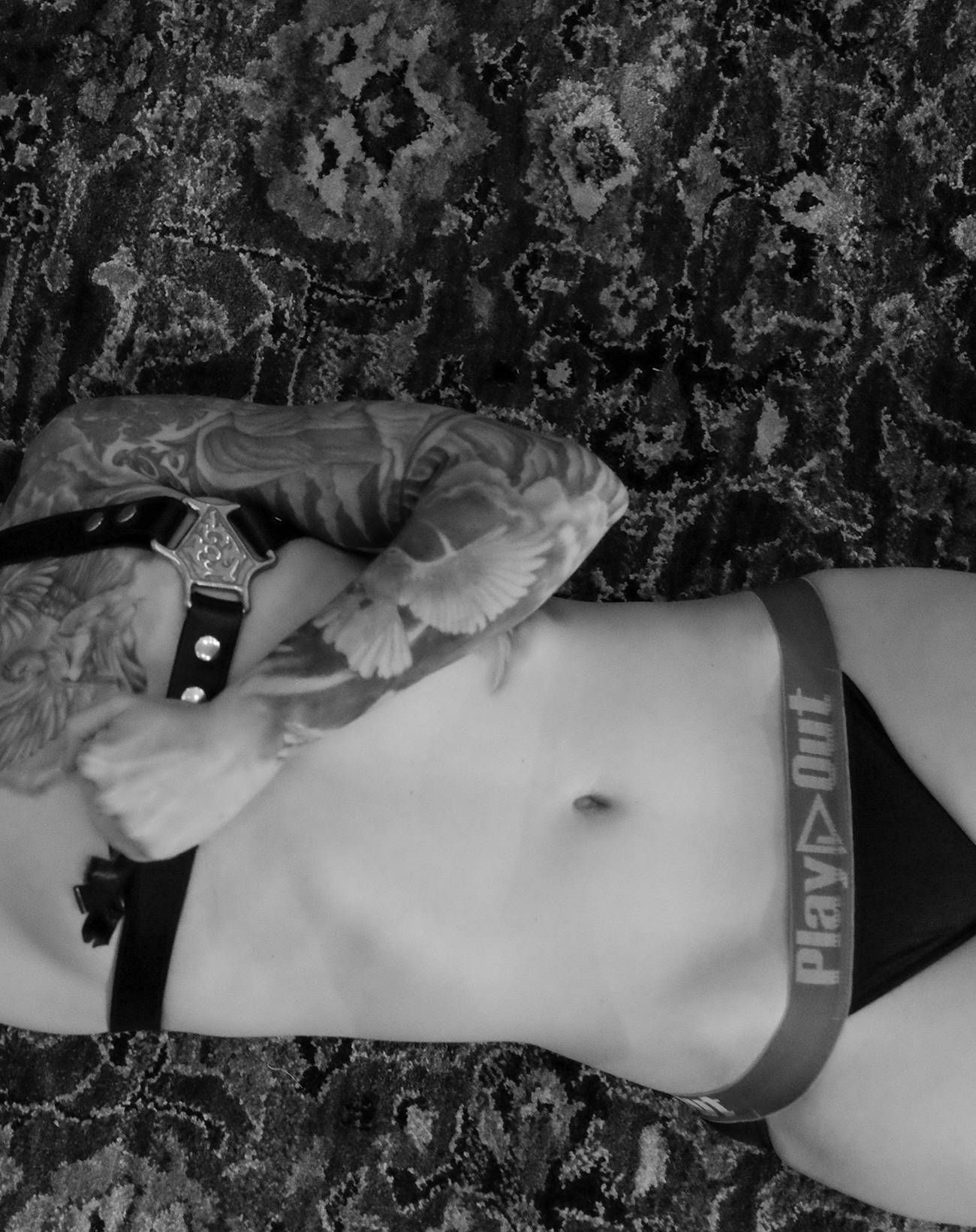 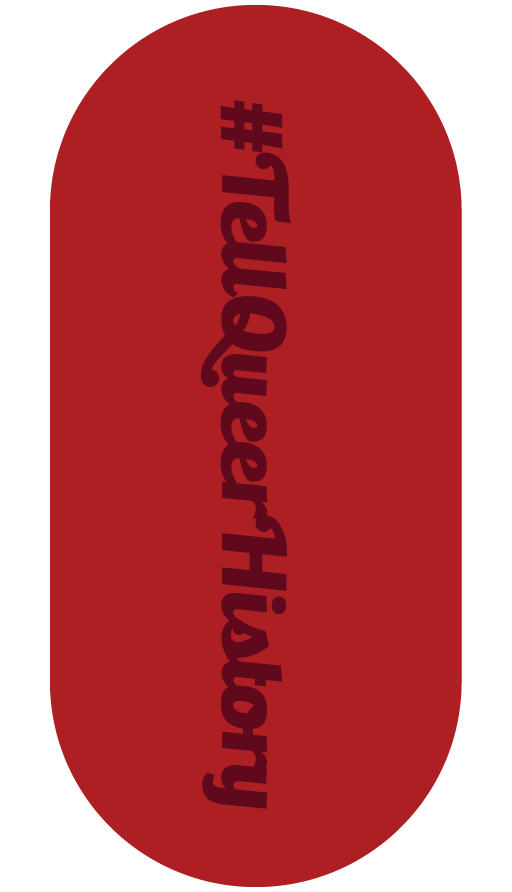 Leather and Kink... an era of exploration

By all readily available accounts online, the origin of the harness is ambiguous. Bondage and different forms of kink play have a long and varied history – some believe the idea of harnessed for the US scene came from Japanese bondage seen by gay men during World War II – the rise of the leather community as many of us know it came after World War II. Many men were able to experience and explore their homosexuality while in the military, and some found solace in the newly developing leather scene back in the United States. “Tom of Finland,” known for drawing erotic gay scenes, also popularized certain practices and outfits that spread across the community.

The leather centers around kink and fetish: a full getup for hardcore “leathermen” can cost upwards of $3,000. But the community that was built around kink, fetish, and sex became about finding a safe space and a family, and the bar and club spaces provided freedom and safety. The leather scene allowed a space (though often raided by police) for gay men to explore themselves. Leather clubs were often disguised as Biker Bars or sports bars to avoid suspicion in the United States and Europe, most notably Amsterdam, Berlin, and London, where different levels of illegality and criminalization applied to queerness, fetish, and BDSM practices.

The leather community is described as rugged, highly masculine, and "men who are interested in men," and who also want to reject the "tropes of effeminacy and preppiness" surrounding homosexuality at the time. As Eric Chaline puts it:

“Leather was everything that the self-consciously effeminate homosexuals weren’t. They were some of the first gay men to reclaim masculinity.”

While the value and influence of the leather community is significant, and people deserve to build communities with those who understand them, the positioning of this community seems to be directly against (or even in reaction to) the idea of the “feminine gay man.” It has a tone of the “not like other gays” around it, which under the 1950’s patriarchy is not surprising.

All of my research of stories and reports center around white cisgender men. Queerness has existed in complexity and nuance for all time, but it is the history-behind-the-history-behind-the-history. In the queer community, we are still working to dismantle this “default image” of the fit, white, able-bodied, gay cisgender man. Beyond this, the stigma of having feminine gender expression as a gay man is still present, an attitude readily summed up by the catchphrase: “No fat, no femmes.” 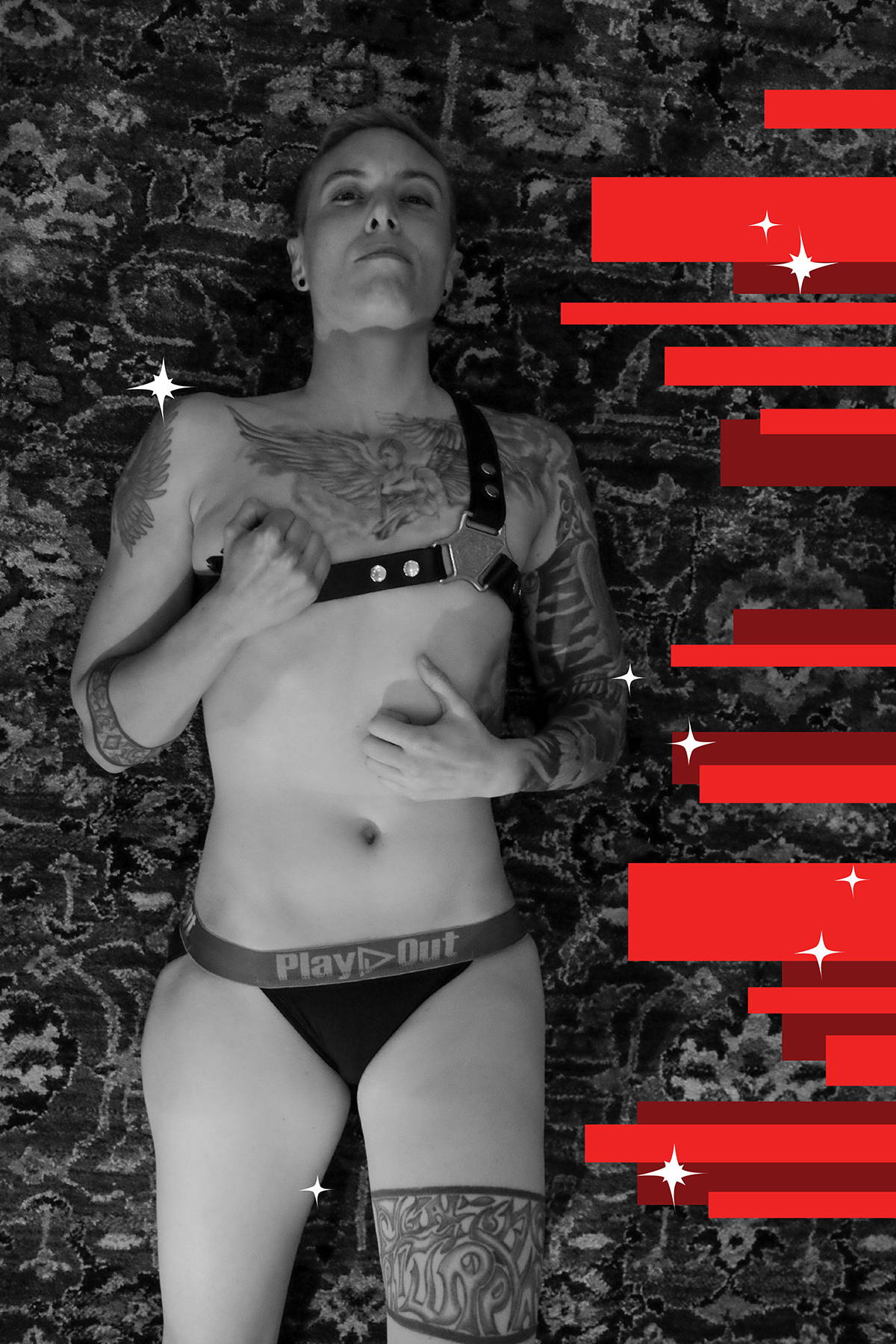 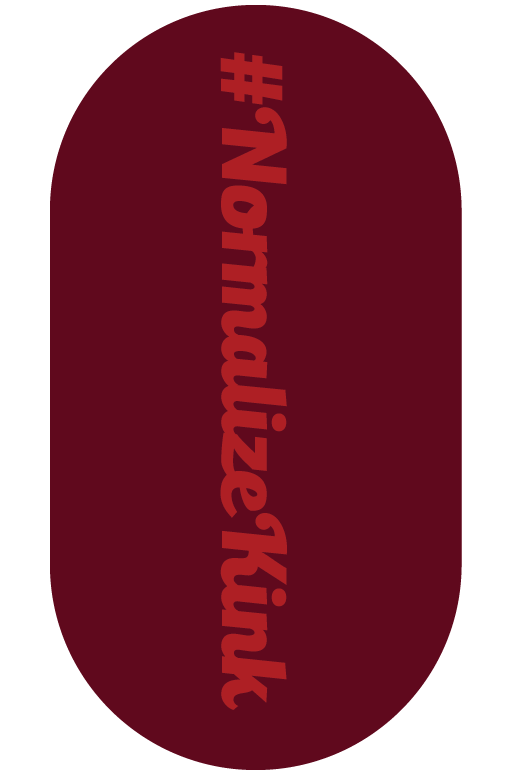 Progress and History Together

There is no doubt in my mind that there were nuanced sub-communities founded around leather, harnesses, kink, and queerness that were not exclusive based on gender, but they are vastly unreported on. Beyond this, I know that the leather community today is varied and diverse. Many bemoan the loss of traditional leather scenes, and losing a piece of that history is truly tragic, especially since the decline of the community was directly linked to the AIDs epidemic.

While the traditional leather scene is in some ways fading, it can also be viewed as developing: kink and dating apps are joining bar scenes, rubber and vinyl are joining leather, and more inclusive spaces are joining (and maybe replacing) the male-only events. While we should never lose this history of leather and kink, moving into a space of affordability, online democratization and inclusivity allow others this exploration who may have never had access before. Kink and queerness exist in many ways: as long as we are all consenting and respectful adults, no way of doing it is wrong.

And even if the leather scene in its traditional form is indeed fading – or simply transforming – the gear is not going anywhere. The rise of popularity in harnesses specifically is profound, and this symbol of kink and queerness has become widespread both within and outside of the community. I think that the spreading of harnesses into runway and fashion is a notable symptom of the ongoing destigmatization of sexual liberation and queerness – as long as we pay homage to the kink and queer roots. New materials, like PVC, vinyl, rubber, and high fashion fabrics are appearing in stylized harness-type garments as well.

Play Out stands for maximal inclusion and total liberation. Our clothing does not have prescribed gender or use, and there are certainly no identity-criteria to be a part of our community. We stand for the diversity, plurality, and unity of the ever-progressing queer movement, and we are proud, most of all, of how we are carrying on queer history and pushing society to evolve. 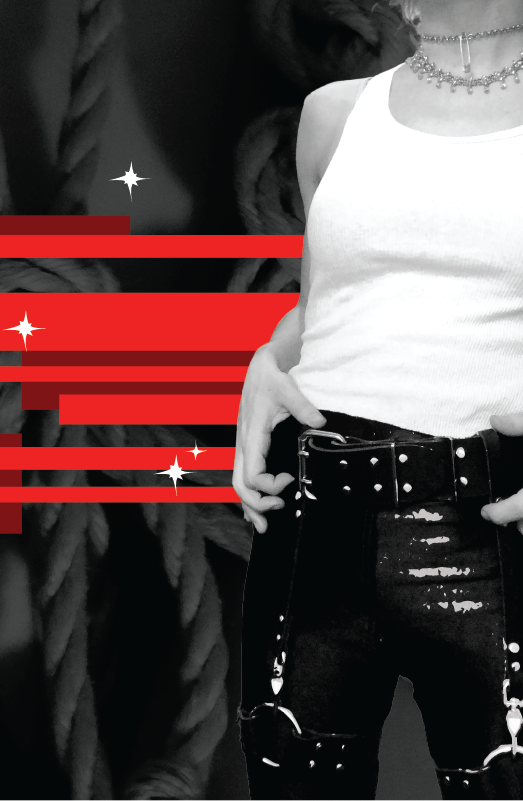